I had a fantastic afternoon on Friday, I spent a few hours at Dorrigo High School for their NAIDOC Week celebrations. 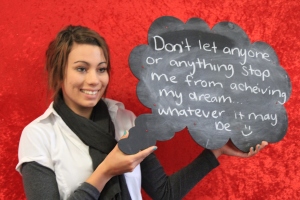 Jay Greentree with her Dreambox

I was up there with the Port Macquarie ABC Open Producer, Wiriya Sati. We met some incredible people. I filmed and interviewed a fair few of them and now I’m editing together a film for the ABC Coffs Coast website and some sound to play on the show tomorrow. I will link the film up here so you can see it.

I have wondered about the impacts of a “Day” on a community before. Is it just tokenistic or does it really impact on people? I came away feeling that the NAIDOC Day celebrations in Dorrigo, did have an impact on community perceptions and relationships.

I suppose standing alone, a “Day” might have little impact but together with a group of people who a ready and willing to learn and change and work together, its impact can be huge.

I remember the Bridge Walk for Reconciliation on May 28, 2000. I was nine months pregnant and we sat at the edge of the bridge, watching 300,000 people share the same vision and being offered a way to express it. It’s about timing and capturing a mood. And that is what happened in Dorrigo in Friday.

I live in rural Australia with my partner and our three kids. I dabble in freelance journalism between packing lunches, doing the school run and coordinating 12words.com.au. I'm also on the board of MicroLoan Foundation, Australia.
View all posts by Liz Keen →
This entry was posted in Arts, Community, My town, Social Justice and tagged ABC, Aboriginal, Dreambox, Film, Indigenous, NAIDOC. Bookmark the permalink.